A Norfolk company has won a multi-million pound contract on the back of coffee-brand Starbucks’s plans to roll out ‘drive-thrus’ across the country.

High Cross Forecourt Canopies –which was sold in a pre-pack administration to DGT Structures in 2010 creating DGT Highcross – will make and fit the steelwork, structure and cladding for at least 50 of the outlets in the north of England and Scotland. The structures will be made at the company’s base at Lenwade, near Dereham.

Managing director Van Thurston said it was a major contract for the company and would provide job security for the teams. DGT Highcross will be working for forecourt operator Euro Garages which has been given the franchise for a number of the ‘drive-thrus’ by Starbucks.

Neil Westrope, general manager at High Cross, said: “We’ve been a supplier to Euro Garages since the end of 2008. It has been a business relationship that we have been building on year on year. “They [Euro Garages] are having a lot of success in providing the Starbucks drive-thru with the way they incorporate the design into their forecourts.”

High Cross completed a number of test forecourts, including one at Stansted, before it won the major contract. It is hoped that there could be further contracts in the future with the scale of Starbucks’ plans. Starbucks announced in December that it would open an extra 100 Starbucks roadside outlets – including drive-thrus – over the next five years across the north ofEnglandandMidlands, creating up to 2,000 new jobs. Euro Garages signed a licensing agreement with Starbucks in March 2010 to open an extra 30 drive-thru sites, which was later expanded to 50 after the success of the first stores. Mr Westrope said: “It gives us security in that forward-order book. It is a piece of the order book that gets good continuity and repetition for the business. “I think at this point in time it gives us confidence with the people that we have. Certainly if this continues – and there are other things in the pipelines – we are looking to invest in apprentices.” He said the company supplies to most of the forecourt names including BP, Morrisons, and Asda. And the company had benefited from the DGT takeover. “The core business of DGT is structural steel and cladding. The canopies have the same core components that DGT still manufactures,” he said. The company employs 140 people, including 15 in the High Cross subsidiary at its Lenwade site. High Cross Forecourt Canopies moved from Besthorpe to Lenwade when bought by DGT Structures.

High Cross called in administrators McTear Williams & Wood on November 8 [2010] after being hit by a downturn in trade and a £573,000 bad debt, The business, plant and contracts were bought by manufacturing and construction firm DGT Structures for £301,000 in a pre-pack administration. 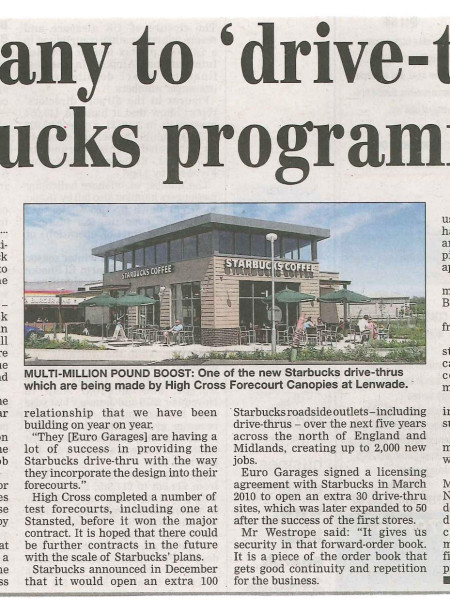