So called ‘pre-pack’ administrations have hit headlines in recent months with a number of high-profile businesses being sold and the government dropping plans for reform. Annabelle Dickson finds out why pre-packs are so contentious and whether they really are good for the economy.

Recent weeks have seen stormy times for a host of businesses battling for survival including clothing chains La Senza, Blacks Leisure and Bonmarche, while closer to home Beccles-based furniture brand Mark Elliot announced plans to close seven of its stores. Uniting all of these, besides the economic downturn, is the fact that all – at some point – have entered into what is known as pre-pack administration – an insolvency process which can see the agreed sale of a company, before it publicly goes into administration. Supporters argue that pre-pack deals help to save jobs when a company flounders, but critics question whether it can be used as a means to leave some creditors out of pocket. It is a subject which has been looked into by the Department of Business, Innovation and Skills which has been running a consultation on reforms. And with the economy shrinking by 0.2pc in the final quarter of last year, we may see an increase in firms going under or resorting to pre-packs to survive.

Last April, business minister Ed Davey suggested the introduction of a minimum three-day notice period before any pre-pack deal could take effect, so giving other interested parties a chance to intervene. The Association of British Insurers (ABI) – which represents most of the major fund management bodies – also raised concerns about the pre-pack process in its submission to the BIS Select Committee.

“We think that the heart of the problem lies in the serious conflict of interest inherent in an insolvency practitioner devising a pre-pack sale in secret in conjunction with the directors and secured lenders of a failing company, and then immediately implementing that transaction as administrator with a duty to act in the best interests of all creditors,” the ABI said.

“Despite the professional and legal rules designed to prevent abuse, it is inevitable that a large proportion of pre-pack transactions will be structured to favour the owners of the business and their secured finance providers, who initially engage the insolvency practitioner and are privy to the design of the scheme, at the expense of unsecured creditors.”

But the government last week shelved the reforms as it is unconvinced that any benefit from further controls would outweigh the burden it imposed.

Chris Williams, a partner at Norwich-based insolvency specialists McTear Williams and Wood, who is a member of R3 – the insolvency profession’s trade body – and has been sitting on a policy group advising the government on the issue, said the system had both pros and cons.

“Like many things in life there are good and bad pre-packs. My profession needs to work to ensure that there are very few bad pre-packs. A pre-pack business and assets sale at a fair price with the proper premium being paid for goodwill can undoubtedly be the best deal for creditors but sometimes the price achieved can appear to fall short of this and creditors are left nursing big losses and possibly getting into financial difficulty themselves.

“I think it is positive that the government has continued to allow pre-pack administrations without putting up unnecessary barriers. It is now the responsibility of the insolvency profession to use this power wisely and explain why the deal was the best available,” he added.

Richard Fleming, UK head of restructuring at KPMG, which orchestrated pre-pack deals for Blacks, Bonmarche and La Senza, also spoke of the benefits.

“Without the pre-pack mechanism, it is likely that more stores would have had to close and more staff would have lost their jobs. Importantly, the use of a pre-pack, rather than selling the businesses out of a trading administration, minimised the disruption to operations.” He said that at a time when many more businesses faced collapse, the government decision on implementing the reforms was an important acknowledgement of the role pre-packs had to play in the country’s corporate recovery.

North Norfolk MP Norman Lamb said he had taken up the issue with the government after being made aware of concerns with the current system. “The concern is that this often can just become a stitch-up and it ends up as a fait accompli,” Mr Lamb said. “You do not have a choice for a proper sale and the creditors can lose out.

“We have got to monitor this closely and any idea that people have about how we can cut out abuse would be very welcome.” 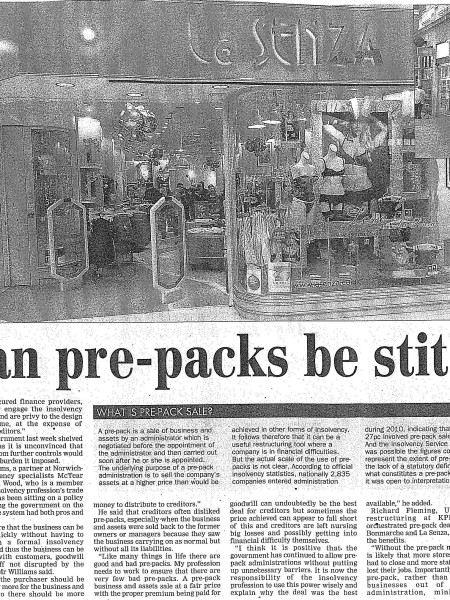