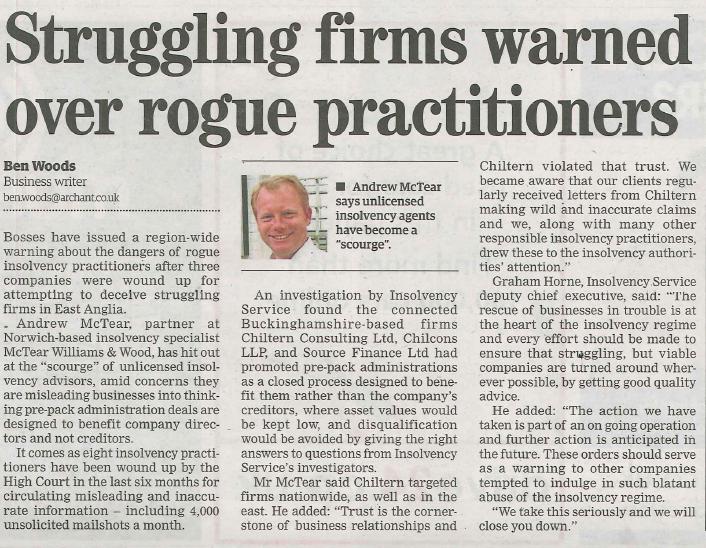 Andrew McTear, partner at Norwich-based insolvency specialist McTear Williams & Wood, has hit out at the “scourge” of unlicensed insolvency advisors, amid concerns they are misleading businesses into thinking pre-pack administration deals are designed to benefit company directors and not creditors. It comes as eight insolvency practitioners have been wound up by the High Court in the last six months for circulating misleading and inaccurate information – including 4,000 unsolicited mailshots a month.

An investigation by Insolvency Service found the connected Buckinghamshire-based firms Chiltern Consulting Ltd, Chilcons LLP, and Source Finance Ltd had promoted pre-pack administrations as a closed process designed to benefit them rather than the company’s creditors, where asset values would be kept low, and disqualification would be avoided by giving the right answers to questions from Insolvency Service’s investigators.

Mr McTear said Chiltern targeted firms nationwide, as well as in the east. He said: “Trust is the cornerstone of business relationships and Chiltern violated that trust.

“We became aware that our clients regularly received letters from Chiltern making wild and inaccurate claims and we, along with many other responsible insolvency practitioners, drew these to the insolvency authorities’ attention.”

Graham Horne, Insolvency Service deputy chief executive, said: “The rescue of businesses in trouble is at the heart of the insolvency regime and every effort should be made to ensure that struggling but viable companies are turned around wherever possible, by getting good quality advice.

He added: “The action we have taken is part of an on going operation and further action is anticipated in the future. These orders should serve as a warning to other companies tempted to indulge in such blatant abuse of the insolvency regime. We take this seriously and we will close you down.” 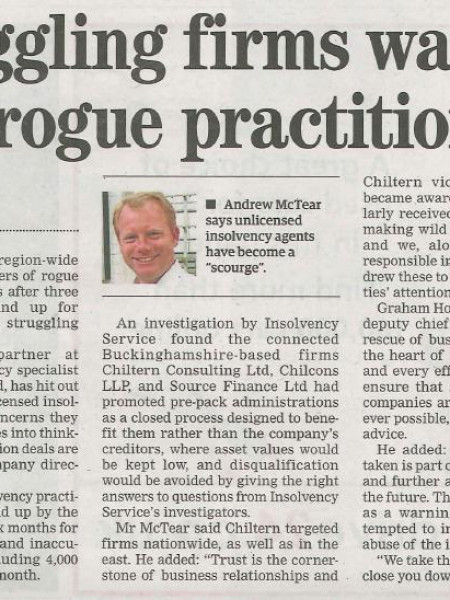