Smaller supplies are likely to bear the brunt if the sale of Bernard Matthews can only be completed through a pre-pack administration deal, an insolvency expert has warned. But staff relying on the company's pension fund should be well protected if the government-backed pensions lifeboat has to take on responsibility for it to smooth the sale of the troubled turkey producer.

Speculation has linked 2 Sisters Food Group with a bid for Bernard Matthews which has been up for sale since June but a stumbling block is understood to be the £16m deficit in the company's pension scheme which could be transferred to the Pension Protection Fund.

Andrew McTear, a parther at McTear Williams & Wood in Norwich, said negotiations were likely to have been going on behind the scenes for months to find a way forward for the company - possibly a pre-pack administration in which the company's assets, but not is liabilities, are transferred to the new owner. "Those who are in the pension scheme are quite well protected. The people who are going to lose the most if the company goes into administration are the unsecured creditors, which will include trade suppliers," said Mr McTear.

"One thing that can happen when a big company goes into administration is that the smaller companies can get big, bad debts and there can be a domino effect." He said any buyer would be keener on Bernard Matthews if it could shift the company's pension liability - but said the PPF was a "sophisticated creditor - they know what they want and how to get it."

Mr McTear said: "What will be going on is a deal will be being done between the triangle of the PPF, the pension scheme trustees and the purchaser. It's likely that the PPF will get some shares in the purchaser or the vehicle they use to buy the business and its assets."

Bernard Matthews employs more than 2,000 people in Norfolk and Suffolk and the potential changes to the pension scheme are understood to affect around 750 people. Anyone currently drawing their pension will be unaffected but future pensioners could receive only 90% of the payments they are due up to a maximum of around £33,680 according to the PPF.

Bernard Matthews company has struggled in recent years as sales have slumped and rivals in the food sector have consolidated. It came close to collapse in 2013 when owners Rutland Partners stepped in and injected £25m but the turnaround plan has had little effect. The company's latest accounts showed turned fell from £306m to £276m in the year to June 28 2015 with a pre-tax loss of £5.2m. 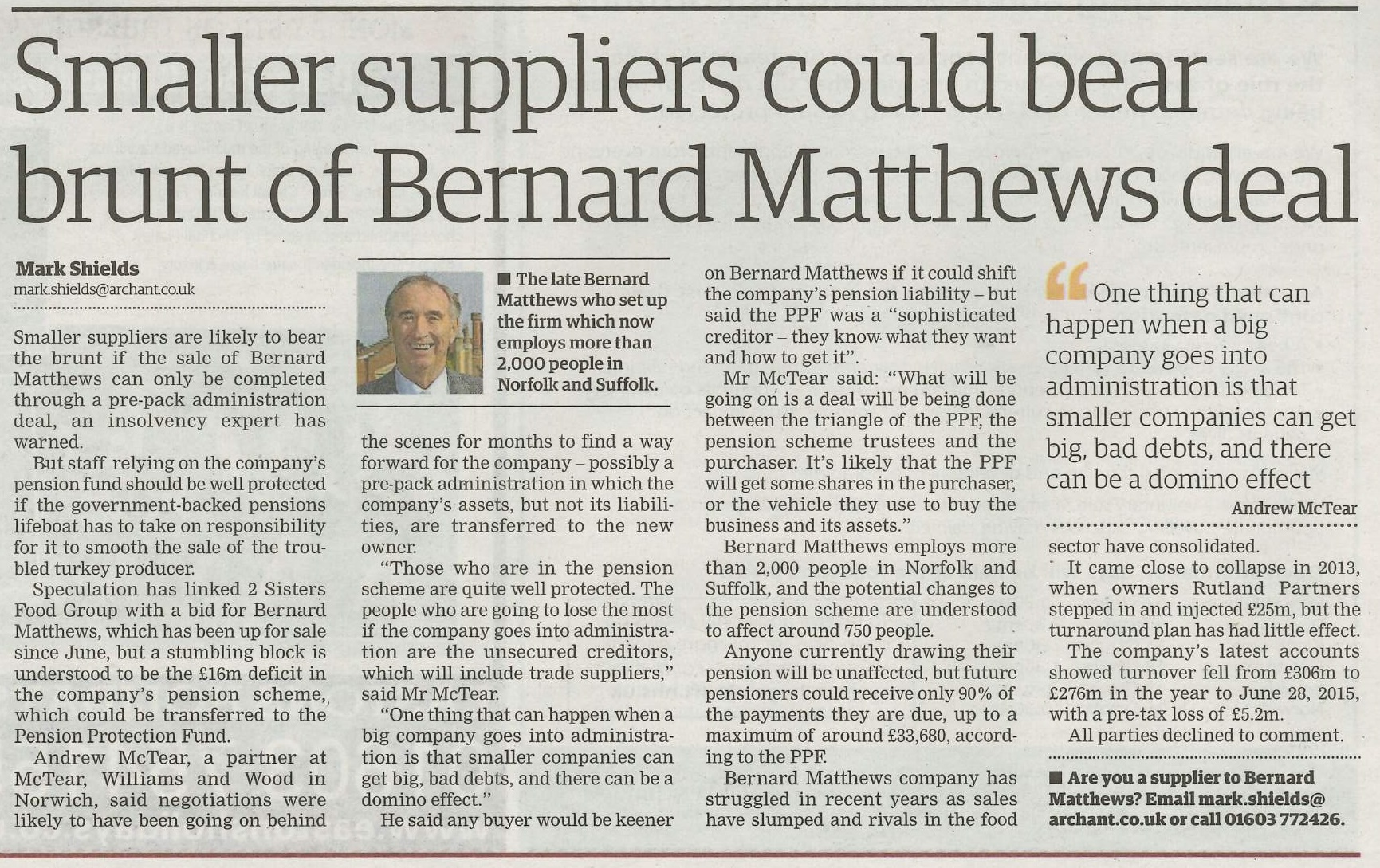