Private school owed £500,000 when it folded just before start of new term

A private school which announced it was closing weeks before the start of the new term collapsed owing more than £500,000, according to its liquidator.

Hethersett Old Hall School blamed a fall in pupil numbers for its financial problems when it folded in August.  Now a report from liquidator McTear Williams & Wood into the school's finances shows it owed £115,000 to trade and expense creditors.  It also owed £288,000 to staff, £25,448 to HMRC and £95,300 to parents in school fees which had been paid in advance.  The biggest creditor was its bank Barclays.

However the school's assets should easily cover its debts once the property has been sold.  It's 15-acre site and buildings could be worth around £4m according to the report, leaving £3.5m after the bank has been paid off.  It charged up to £5,210 a term for day pupils and £9,760 a term for boarders but cut sixth form fees to try to increase pupil numbers.  According to its annual report for 2017 headmaster Stephen Crump and his wife made two trips to Asia to try to drum up numbers.  They attended expos in Hong Kong and Guangzhou in China but the number of pupils fell from 160 to 2107 to 111 this year.

Its most recent accounts, filed last year, show it made a loss of £56,000 in 2017.  One parent, whose daughter was at the school, said she was shocked the school had collapsed.  "It was a wonderful school," she said.  "It was like a family and for that amount of money it could easily have been rescued."  Another parent said: "Numerous parents offered to help (to increase pupil numbers) and were never listened to.  The staff were amazing and I feel so sorry for then."

At the time the closure was announced parent Rachel Canham said: "We're absolutely devasted.  My daughter was meant to be returning to Hethersett to start sixth form in September but now she's currently sat at home being physically sick with stress and worry of where she's going to end up and all I can do is desperately call around trying to find her a place somewhere."

They added governors had tried to save the school. 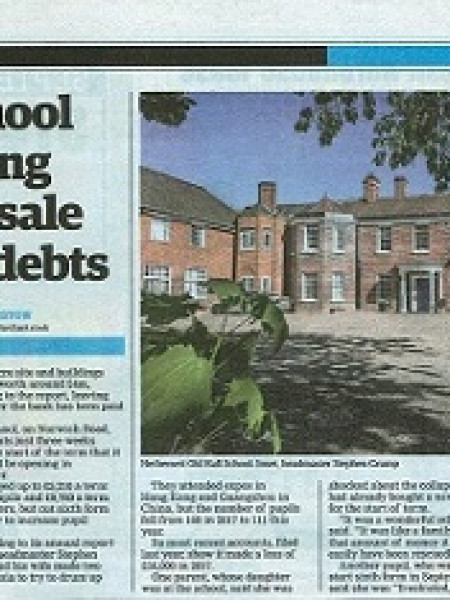