The name of Royal Warrant-holding construction company will live on after a prominent businessman bought parts of the firm following its administration.

Sprowston-based heritage building firm WS Lusher & Son, which has a reputation for restoration of historic churches and stately homes, called in administrators last year after facing difficult trading conditions. But its name is set to endure after Melton Constable-based property developer Roger Gawn bought its plant, materials, vehicles and intellectual property rights to form a new company, WS Lusher & Co. Five former staff will continue with the new business with Kim Lusher, the great-granddaughter of company founder William Lusher, among them whilst former director Mark Lusher will continue as a consultant.

Mr Gawn, who owns MeLton Constable Hall as well as sites such as Tattersett Business Park said: "WS Lusher had an excellent reputation and it's that reputation that needs to be protected and enhanced, if that is possible. It is always said to see a company get into difficulties."

Administrator Chris Williams of McTear Williams & Wood in Norwich said high overheads with a workforce of nearly 40 people and a few sub-contractors had led to the firm's insolvency. He said: "The firm had a couple of contracts which didn't go very well, it had a highly skilled staff and wasn't able to make the necessary cuts." Much of the workforce was laid off during the administration with a few staying on to oversee remaining contracts. Mr Gawn said he was keen to build a core of high quality staff. He said: "I am a bit traditional and I think there is a way to do it by having a lot of permanent employees but also mixing and matching. Through the difficult times for the construction industry during recession, many people went on their own so there are highly skilled people our there working independently."

Mr Gawn said he could see staff numbers doubling to 10 but said the firm would pick and choose contracts and "walk before it tries to run". He added the company was already working at Melton Constable and contact with former clients had been well received. It is not yet known if WS Lusher will continue at the former firm's Sprowston site, which was put up for sale last year. 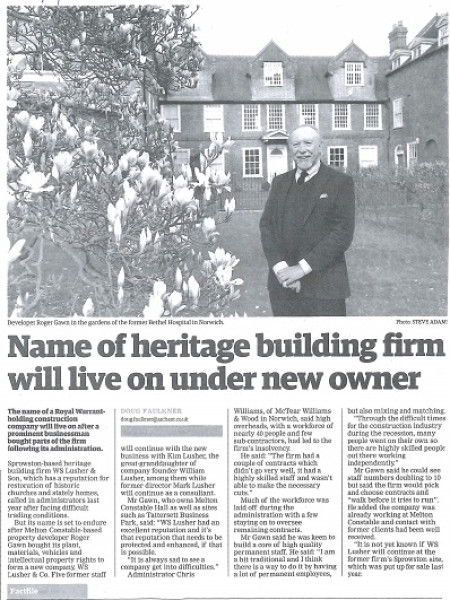