Hadleigh: electrical retailer B V Hicks to close after 54 years of trading

B V Hicks Ltd in Hadleigh will be placed in liquidation after its owner died last year and finding it “difficult to compete” with nearby supermarkets, out-of-town retail parks and internet shopping, insolvency practitioners McTear Williams and Wood said.

B V Hicks Ltd was formed in 1960, originally trading in Stowmarket before expanding into Hadleigh in 1968, selling, repairing and renting televisions. Sales of white goods were added in the 1970s.

In a statement, McTear Williams and Wood said: “With the rise in the number of out-of-town retail parks and the increasing use of the internet, competition increased and as a small local retailer it became more and more difficult to compete.

Toby Hicks, director of the company, added: “My family and I would like to thank local customers who have supported the business over many years. It is very sad to have to close this long-established business. “I would also like to thank the dedicated staff for their hard work and wish them ell for the future.”

The company has instructed McTear Williams and Wood to convene a meeting of creditors to place the company in to liquidation. 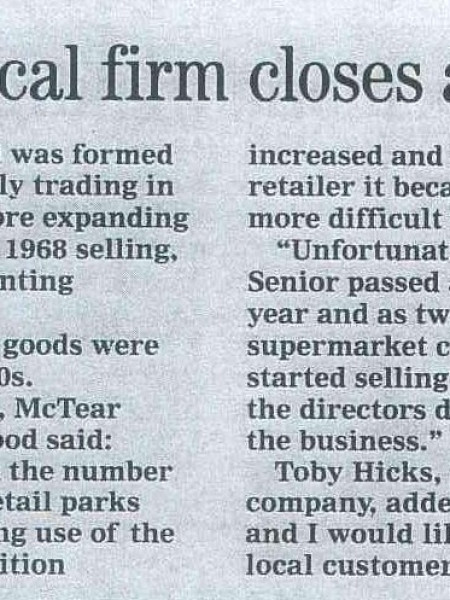