Small firms owed money by Bernard Matthews could face a struggle for survival following the turkey producer's sale, an industry leader warns today. The pre-pack administration means uncertainty for creditors who do not yet know how much of their debts will be paid.

Clarke Willis, group chief executive of Anglia Farmers, said he feared for the survival of many. Smaller creditors could be left battling to survive because of the domino effect of the deal to save Bernard Matthews, industry experts warned. They fear the pre-pack administration - which transfers a company's assets but not its debts - which saw the company taken over by entrepreneur Ranjit Singh Boparan could ultimately leave "hundreds" of suppliers out of pocket.

Administrators Deloitte are understood to be writing a known creditors list this week, though a full list of the company's creditors is not yet available.

Clarke Willis, group chief executive of Anglia Farmers, said he feared the impact of the Bernard Matthews deal would be business failures across both Norfolk and Suffolk. "There will be hundreds and hundreds of local businesses owed money and the sad thing is that an awful lot of them will not be able to survive it," he said. "I think the fall-out is going to be fairly massive." Mr Willis said Anglia Farmers was owed around £9,000 but he knew of suppliers who were owed "hundreds of thousands of pounds". "Businesses like that have got a lot of smaller suppliers that rely on them. There will be a raft of smaller individual businesses doing plumbing, electrics, van repairs and so on. £10,000 to some of them will be major."

Bernard Matthews was acquired by the Boparan Private Office, an investment firm owned by Ranjit Boparan, the owner of the 2 Sisters Food Group, in a pre-pack administration. The turkey producer, Europe's largest, employs more than 2,000 people at sites across Norfolk and Suffolk.

The National Farmers' Union has also raised concerns at the deal and is offering advice to affected members. Chief poultry adviser Gary Ford said: "Given that part of the business involves the ongoing rearing of turkeys, we recognise that a quick sale of the business was expedient. However, we also recognise that as a result of this arrangement a number of suppliers - some of which will be NFU members - will have lost out financially."

Administrators have eight weeks to issue proposals to creditors, though in a pre-pack administration the process is usually faster, said insolvency specialist Andrew McTear. He had previously warned of a "domino effect" for creditors and warned suppliers should prepare themselves for the worst. "Trade creditors will have seen their cashflow hit. It's unlikely they will receive any payments in the next two or three months, which is the normal timeframe they would expect," said Mr McTear, a partner at McTear Williams & Wood in Norwich. "They need to assume they are not going to receive any payments in that timeframe and manage their business accordingly."

News that some of Bernard Matthews pension liabilities could pass to the Pension Protection Fund has been criticised by politicians. It is understood members of the Bernard Matthews Pension Fund which closed in 2004 will be passed to the government-backed safety net.

North Norfolk MP Norman Lamb said the move "completely undermines people's confidence in pension funds and the security of the monies they have paid in and has been paid in on their behalf." He added: "We seem to be getting repeated examples of people's rights being under-mined in this way. It is a good thing the Pension Protection Fund is there but it is an unattractive situation where people's rights are being undermined in this way."

Former pensions minister Baroness Altmann said she would want to know that there was no alternative and that the Bernard Matthews deal was the best possible outcome. 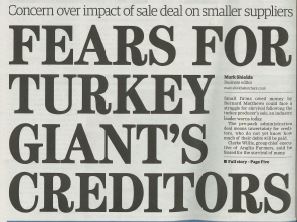 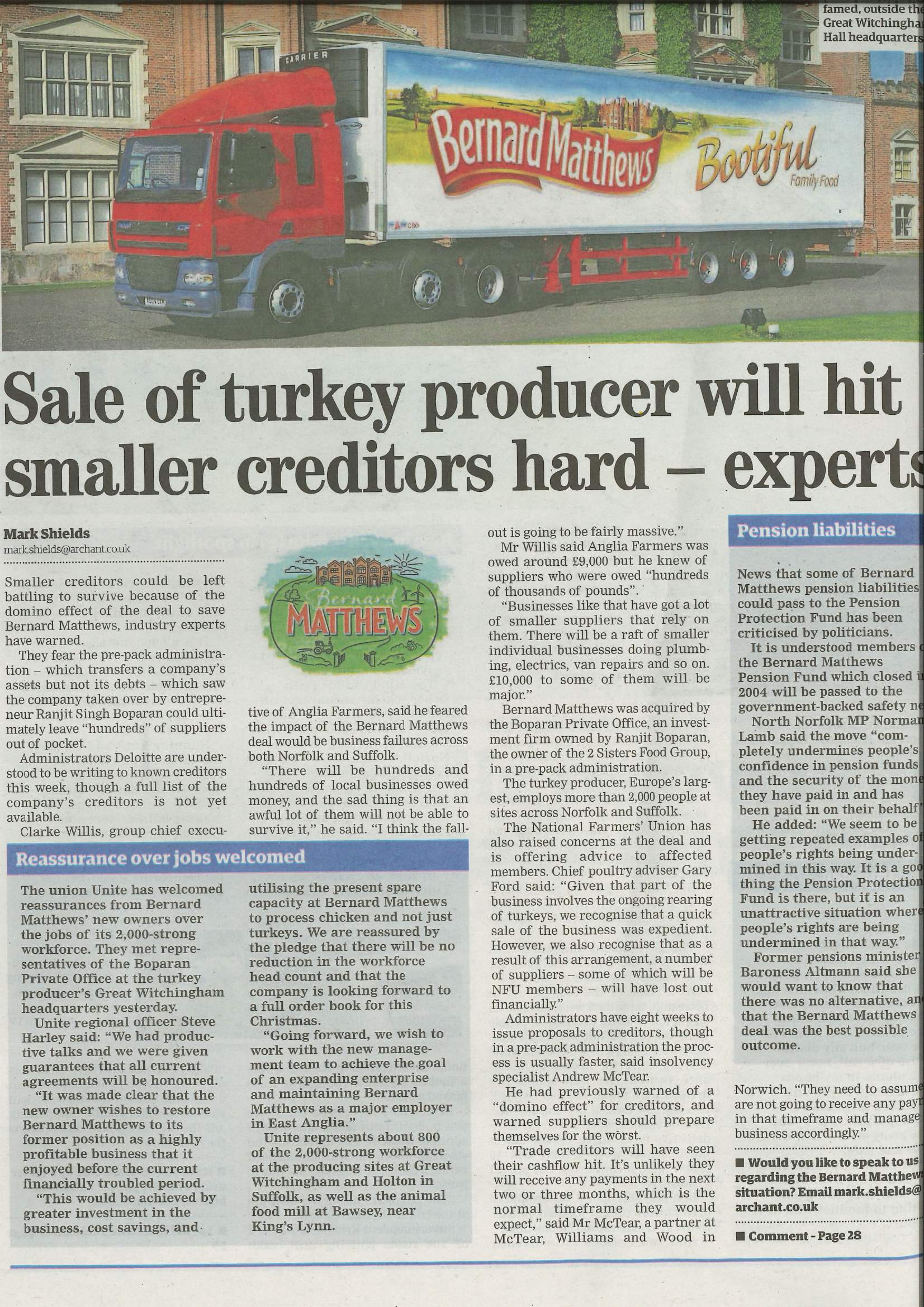